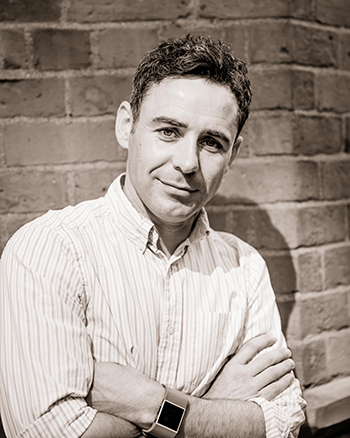 In the latest edition of our interview series in which we ask Pact members some deep - and some not so deep - questions about their personal and professional lives, we hear from Kieran Doherty, Co-Founder and Joint Managing Director of Belfast-based Stellify Media and Pact National Rep for Northern Ireland.

He has built a reputation as one of the industry's leading format producers and is responsible for the creation of a number of international entertainment formats including Secret Fortune (BBC/SRF/TV4), Take The Money And Run (ABC) and Can’t Touch This (BBC/FOX).

Kieran comes from a writing background and his TV writing credits include The Sparticle Mystery for CBBC, Pajanimals for US network Sprout, the IFTA award winning Big City Park and the American CINE Gold Eagle and HUGO Certificate of Excellence-winning Sesame Tree series 1 & 2.

Every time I’ve felt even vaguely successful it’s felt very much like a stomach ulcer.

Are you a morning or night person?
I have a six-year-old son who only seems to need about four hours sleep, so I am a morning person, but not by choice.

Which of your daily habits reveals the most about your character?
I like to get the bus to and from work. I love watching the world go by. It takes me about 30 minutes to get in. On the journey to work it settles my mind and sets me up for the day. On the journey home it gives me time to process all the usual madness that goes on in production and actually unwind.

What’s the luckiest break you’ve ever had?
The short answer is I saw an ad in the paper looking for people with TV ideas, no experience necessary. The long answer is that I’ve been lucky enough to surround myself with great people who have helped me enormously along the way. Too many to name, but they know who they are.

What person – living or dead – do you most admire?
My dad. He died five years ago, when we were in the process of setting up Stellify. He was a wonderfully uncomplicated man. You could depend on him. If he said he was going to do something, he did it. I’ve spent my life trying to live up to his example... not always successfully!

Avocado on toast or Full English?
Full Irish, please. None of that black pudding nonsense, plenty of potato bread and soda farls.

What’s the best piece of advice you’ve ever been given?
It’s a tie between a lyric from The Bare Necessities, “Don’t waste your time running around, looking for something you want, that can’t be found.” Or a line from the movie Ronin, “Whenever there is doubt, there is no doubt.”

Describe what a producer does in three words:
Everything and nothing.

What does success look like?
I don’t know what it looks like, but every time I’ve felt even vaguely successful it’s felt very much like a stomach ulcer.

What did your biggest professional setback teach you?
I’d rather be wrong about thinking I’m right, than be right about thinking you’re wrong and have done nothing about it.

Describe your work/life balance in a word.
Off-kilter

Where do you go to relax?
Home

What TV programme or film do you most often recommend to other people?
The Young Offenders. God I love that show so much. Or Columbo, I have a list if you want to see it?

Tell us something about yourself that your colleagues don’t know.
I am making this up as I go along.

If you could go back to the beginning of your career, what piece of advice would you give to yourself?
Never be afraid to take a chance on yourself.