For Black History Month we asked Woodcut Media’s Creative Director Derren Lawford to take a trip back through time and reflect on his early connections with TV and his career to date in the industry... 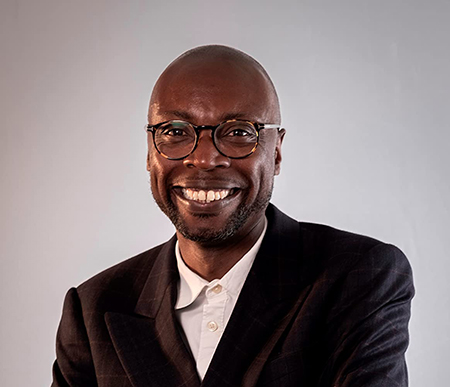 Derren joined Woodcut Media in 2014. As Creative Director he is responsible for development and editorial strategy and securing commissions, as well as working with CEO Kate Beal to drive co-production and programme finance opportunities across the company’s slate.

Since joining Woodcut, Derren has also played a pivotal role as Executive Producer working alongside film and TV talent on shows such as Football: A Brief History by Alfie Allen, Jo Frost on Britain’s Killer Kids, Fiennes: Return To The Nile and the Idris Elba documentaries Cut From A Different Cloth and Mandela, My Dad and Me. Other key productions include the BFI supported feature documentary, Generation Revolution which premiered at Sheffield Doc/Fest and had a theatrical release in Picturehouse Cinemas.

Before joining Woodcut, Derren was a commissioner at London Live, Head of Content for youth media agency Livity and Editorial Advisor to multi-millionaire YouTuber Jamal Edwards. Prior to that Derren had a long-standing career in various roles at the BBC including among others Global iPlayer’s Head of Programming and Scheduling, Panorama’s first Multiplatform Editor and Multiplatform Executive Producer for the award-winning BBC Three series Our War.

Being underestimated, underappreciated and undervalued… unfortunately that’s not an unusual experience if you’re Black and working class.

Q. What is your earliest TV memory?

Kid’s TV I guess. Stuff like Tiswas and Space Ghost!

Q. Growing up, who was your TV hero and why?

KITT/David Hasselhoff from Knight Rider, and then Scott Bakula from Quantum Leap, and Will Smith from Fresh Prince of Bel Air. They all lived a life less ordinary, forged their own paths.

Q. What made you want to work in TV?

I’ve always been interested in people, politics and society and so moving from feature writing to radio documentaries to TV felt like a natural progression.

Growing up watching Def II, TV felt like a vibrant and innovative world; watching Black Britain it felt like a representative one; programmes like Dispatches made me realise TV could be important too and I was keen to be a part of that.

I remember working in radio and coming across an episode of Whistleblower on BBC One and being amazed at the bravery of the series and how smart it was to have a Black traffic warden as the key protagonist. No-one expected much of him. He was such a stereotype that people didn’t notice or care about him and he used that to his advantage. I thought that was really shrewd and exciting casting and wanted to be part of an industry that was making those types of bold shows. I didn’t realise Marcus Ryder was the series producer at the time and not sure I’ve ever mentioned to him since that he’s one of the reasons I was keen to work in TV… well I have now!

As long as those who are currently in charge are persistently, relentlessly committed to change... then there’s a chance that the generation of leaders that follow them won’t even question following suit.

Q. What was your first role in the industry and how did you land it?

The first role I landed was as a development researcher for OR Media, I think it was to develop a Black entertainment show for Channel 4 in the late 90s. At the time I was a freelance journalist and happy to share ideas on the Black music scene. In the end my suggestions were used to update and overhaul an existing series at the time called Flava.

Q. What’s the best piece of career advice you’ve been given?

The best piece of career advice was given to me by Robbie Gibb when we were both at the BBC. He said: “Think about how you would describe yourself in a sentence. Then think about what sentence others would use to describe you. If there’s a disparity between the two, what can you do to change that sentence in other people’s minds?.” It stuck with me because we’re all ultimately in more control of the narrative of our own careers than we perhaps like to think.

Q. What’s the biggest challenge you’ve faced in your career?

Being underestimated, underappreciated and undervalued, although unfortunately that’s not an unusual experience if you’re Black and working class – a fact the industry is increasingly recognising and trying to reconcile.

Q. Who is your TV hero today and why?

Ava DuVernay. She defies categorisation and focuses on directing, producing and distributing great work that informs, educates and entertains from 13th to Scandal and everything in between. Her work is credible, commercial and critically acclaimed and she does this while being supportive of new/emerging talent in a way many others in the industry could benefit from emulating.

Be as authentic as you possibly can be. That’s the only way you’ll know the extent to which the industry is genuinely willing to embrace you and deserves your unique perspectives on the world.

Q. How optimistic are you that the current commitments being made by broadcasters and other businesses will lead to lasting change for the representation of Black people on and off-screen at all levels of the industry?

Consistent and competent actions breed confidence. As long as those who are currently in charge are persistently, relentlessly committed to change, to listening and learning from those whom the system doesn’t currently benefit, then there’s a chance that the generation of leaders that follow them won’t even question following suit. If that happens then we’ll have reason to look back at this moment in time and feel we were right to feel optimistic and have confidence in the industry to effect meaningful, systemic, long lasting change.

Q. As a creative business leader, how do you approach diversity and inclusion within your company?

By being as open to the possibility that anyone, from any background has the ability to do great work and by trying to see the potential in people and not just their proven track record.

Q. What programme or series are you most proud of having been involved in?

Fiennes: Return To The Nile – as a company, Woodcut had never made a series of this scale before and had never worked with the channel before (National Geographic). In the end it became a global commission, had lots of press in the UK and US, a BAFTA screening in conversation with Joseph Fiennes and rated incredibly well for the channel. As such I’m proud that I didn’t let not doing something before prevent me from pitching and executive producing something new.

Generation Revolution – this feature documentary about young Black activists in the UK marked the directorial debut of Cassie Quarless and Usayd Younis. It debuted at Sheffield Doc/Fest, received BFI funding, had a theatrical release via PictureHouse and was screened all over the world. I was delighted to play a part as a consultant executive producer in supporting new talent committed to an important message, before it became fashionable to do so.  Four years later it is now a part of Netflix’s Black History Month collection curated by Adeymei Michael.

Trap Town and Young Upstarts – these were documentaries I commissioned at London Live giving TV debuts to director Sebastian Thiel and Dhanny Joshi’s Big Deal Films respectively. They’re both great talents who have gone on to do a consistently good and diverse range of work.

Q. What piece of wisdom or insight do you want to pass on to the next generation of content makers?

To be as authentic as you possibly can be. That’s the only way you’ll know the extent to which the industry is genuinely willing to embrace you and deserves your unique perspectives on the world.

Pact would like to thank Derren for taking part in our interview series.