For Black History Month we asked Douglas Road Productions’ Managing Director, Angela Ferreira to take a trip back through time to share her story of getting into the industry and what she’s learnt along the way… 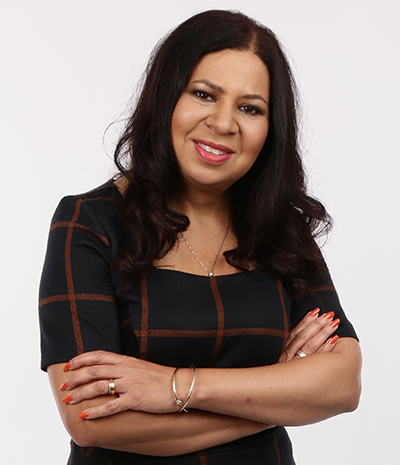 Angela joined Douglas Road in 2017 and now oversees the development and production slate. She started her career at the BBC 25 years ago where she worked primarily across Entertainment and Children’s with forays into News and Drama.

Angela then went on to produce and executive produce Big Brother, the BBC’s coverage of Glastonbury and the MOBO Awards as well as other live and event shows. She has worked as a commissioner at Channel 4 where she looked after Richard & Judy, The Paul O’Grady Show, Come Dine With Me and daytime quiz shows.

Angela is a guest lecturer at The National Film and Television School where she sits on the TV Advisory Board and is a Governor at The Brit School. She recently received the inaugural BFI Soul Sisters Woman of the Year Award.

Lasting change will come if those in charge now put their full commitment and weight behind having full and equal opportunities in a way that can’t be dismantled in a year or two.

Q. Growing up, who was your TV hero and why?

It was a novelty to see black people on the telly, especially when they weren’t playing a subservient domestic role so it was fascinating to see American lives in posh houses like Diahann Carroll starring as Julia or the kids in Different Strokes and later Will Smith in Fresh Prince. Of the UK shows, I loved Tiswas and Lenny Henry being the star of it.

Q. What was your first role in the industry and how did you land it?

Two of the programmes I’ve mentioned from being a kid were instrumental in me entering TV.  For one, I wrote a review and sent it to the local paper where it was published, and I won a writing competition on another. I was writing music reviews and interviews, dabbled a bit in radio then got a job as a researcher at BBC Manchester on a daytime programme.

Q. What programme or series are you most proud of having been involved in?

I was the series producer of a music show called The O Zone at the BBC and started a lot of youngers off on their careers. Most of them have done really well and we are all still great friends so that is hugely rewarding and we had so much fun.

Recently, I’m very proud of the work I’ve done for Douglas Road. I developed the short drama series, Soon Gone: A Windrush Chronicle which had a totally inclusive crew, won awards and was BAFTA nominated. Additionally, the first programme I pitched for Douglas Road, Black Classical Music: The Forgotten History told a really important story, had wonderful music, asked who and why certain educational choices are made, and was well received.


Q. What’s the best piece of career advice you’ve been given?

The best bit of advice I was given was by a record plugger called Richard Evans. He said, ‘If anyone calls wanting to see you to talk about a job, always see them even if you don’t want the job. You might find out something useful, make a new connection or get a pay rise.’

Q. What’s the biggest challenge you’ve faced in your career?

People trying to pigeon-hole me.

Don’t wait for people to do things for you – you have the technology and the intelligence to forge your own path without asking anyone for permission.

Q. Who is your TV hero today and why?

In the UK, Lenny Henry for having a stellar career across four decades and constantly reinventing himself. Also, his work ethic is astonishing.

Q. How optimistic are you that the current commitments being made by broadcasters and other businesses will lead to lasting change for the representation of Black people on and off-screen at all levels of the industry?

I’m hopeful that the groundwork that has been laid over the last three decades will finally pay off.  Accountability and actions are much more transparent than they were, people have more choice and it is easier to have a voice.  Lasting change will come if those in charge now put their full commitment and weight behind having full and equal opportunities in a way that can’t be dismantled in a year or two.

Q. As a creative business leader, how do you approach diversity and inclusion within your company?

I don’t approach it. It is what we are and what we do naturally.

Luckily, Douglas Road is part of Banijay UK (previously Endemol Shine UK) who have taken diversity and inclusion seriously for many years and are completely supportive of our approach.

Q. What piece of wisdom or insight do you want to pass on to the next generation of content makers?

Don’t wait for people to do things for you – you have the technology and the intelligence to forge your own path without asking anyone for permission.

Pact would like to thank Angela for taking part in our interview series.