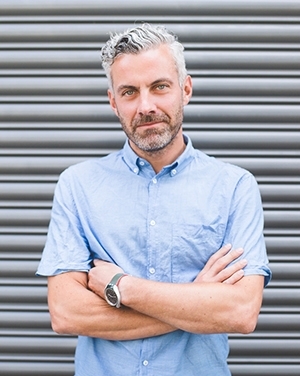 In the latest edition of our interview series in which we ask Pact members some deep - and some not so deep - questions about their personal and professional lives, we hear from Jonathan Stadlen, Founder and Managing Director of West London based indie, Knickerbockerglory.

Jonathan studied Drama and Film at Bristol University, before pursuing a career in television. Focusing initially on development, he worked at some of the UK’s leading production companies including Endemol, the BBC, 19 Entertainment, RDF Media and Pulse Films, where he was the creator and Executive Producer of Pineapple Dance Studios.

At Knickerbockerglory he has Executive Produced a range of productions for major broadcasters, including Stage School and Gypsy Kids: Our Secret World for Channel 4; Boom Town and South Side Story for BBC Three; GPs: Behind Closed Doors and In Therapy for Channel 5; Twin Towns for Sky 1 HD and Jodie Marsh Bodybuilder, Jodie Marsh: Brawn in the USA and the Jodie Marsh On… series for DMAX.

I started Knickerbockerglory telling myself it would be completely OK if we failed. If you start from that place, not much can go wrong.

Are you a morning or night person?
I think it depends what the task in hand is… but I’m probably at my peak in the morning. I actually go to bed embarrassingly early nowadays.

Which of your daily habits reveals the most about your character?
I’m obsessed with washing machines and dishwashers. It’s like a strange sort of alchemy - you throw something dirty in at the beginning, mix it with soap and water and then it comes out thoroughly cleansed. A bit like the process of pitching to the BBC.

What’s the luckiest break you’ve ever had?
Strangely I don’t really believe in luck.  But I do believe in fear - and think it is a very crippling thing. My experience is that any memorable ‘break’ I ever had was more about overcoming a fear of failure (or fear of not being liked, or looking stupid etc) than any form of luck. I started Knickerbockerglory telling myself it would be completely OK if we failed. If you start from that place, not much can go wrong.

What person – living or dead – do you most admire?
Probably my parents - for dealing with me.  And for not dealing with me very well sometimes, but trying their best.  They taught me that finding a means of expression was more important than anything else, and they were more worried about that than whether I turned out to be a prime minister or a bin man.

What's the best investment you've ever made, either financial or time?
Starting our company, Knickerbockerglory. Because I was able to set the moral values of the company, choose what sort of people I spent time with every day (considering we spend more time with colleagues than our friends and family). And be able to do projects because we loved them, not because we were told we had to for monetary reasons. We were also able to set up a profit sharing system, give to charity, start a choir, go sailing every year.  And start a work experience scheme that has spawned five PD-level or above members of staff.

For any ego maniac/television producer, having a reminder of how insignificant we are is a good thing.

Avocado on toast or Full English?
Avocado on toast. But with a poached egg, chorizo, fried chickpeas (with paprika) and a cheese straw on the side. Plus lychees for dessert.

What’s the best piece of advice you’ve ever been given?
My mum told me to 'choose your career beyond your ego’.  I didn’t understand that at 14, but I came to see it as not doing a job so you can answer the dreaded ‘so what do you do?' question at a dinner party with something impressive, but doing a job because it makes your heart sing when you wake up every day.

Describe what a producer does in three words:
Negotiate.  Compromise.  Encourage.  (Probably in that order)

What does success look like?
For me, I would feel successful if I had been a good Dad. A good partner. Created a nurturing environment for the people I work with. Learnt about my good and bad bits. Expressed myself. Felt joyful. Earned enough money to feed myself (good cheese straws aren’t cheap).  And go on a nice holiday every year.


What did your biggest professional setback teach you?
Firstly it was setbacks (plural).  Secondly it made me realise that being prepared to fail is a really helpful thing, especially if you believe the adage that you can only succeed as much as you’re willing to fail. Despite what they say, broadcasters are obsessed with ratings, and not going below ‘slot average’, which inevitably means we often end up pitching into a window of sameness and mediocrity. It’s hard to go any higher above slot average than they are willing to go below it.  So in a nutshell, my setbacks taught me to be prepared to fail.  And embrace it.

Describe your work/life balance in a word:
Furk (not an extended expletive - but half fun, half work)

You don’t have to win them all - a few good relationships are better than lots of average ones.

Where do you go to relax?
Two places - the sea and the mountains.  I love sailing and skiing. Both of them make me feel at the mercy of something much bigger than myself, and for any ego maniac/television producer, having a reminder of how insignificant we are is a good thing.

What TV programme or film do you most often recommend to other people?
The Bureau - on Amazon Prime. Recommended to me by our exec producer Natalie von Hurter.  One of the best things I’ve ever seen on TV.  I think it’s the most real depiction of counter intelligence I’ve ever seen.  With a classic anti-hero.

Tell us something about yourself that your colleagues don’t know:
I think most of them are better at most things than me.  But for better or worse, I think they know everything else there is to know.  Which is probably too much information.

If you could go back to the beginning of your career, what piece of advice would you give to yourself?
1) It’s all going to be OK 2) You don’t have to win them all - a few good relationships are better than lots of average ones. 3) Do a ski season 4) Be in a west end musical 5) As my old boss Remy Blumenfeld says, we are here for 1000 months on average. You might as well wake up every morning and feel joy at what you're about to do.

Read more The Person Behind the Producer interviews...