As the industry tries to ride out the COVID crisis, we ask Pact members some serious – and some not so serious – questions about their approach to their work and productions. 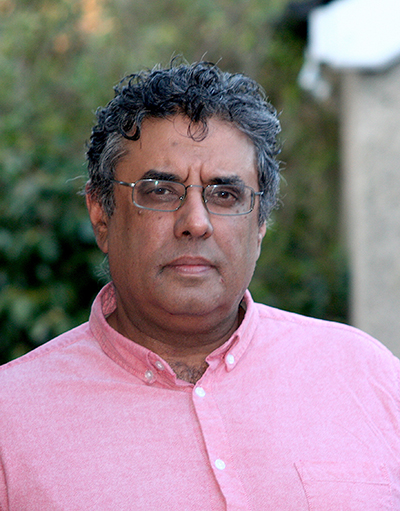 Heenan Bhatti started up Leeds-based ClockWork Films in April last year, during the first Lockdown. In its first year the company has made the award-winning series Ramadan In Lockdown (C4) and the co-produced feature doc The Yorkshire Ripper’s New Victims (Channel 5). The company is a partner on Channel 4’s BAME-Indie Accelerator Scheme and was also part of Channel 5’s BAME Indie initiative.

Heenan himself is a multi award-winning (BAFTA, Prix Europa, Rose D'Or, Royal Television Society, and Broadcast Award) film-maker. His first major documentary film, The Lost Frescoes, followed emergency restoration work on the world-renowned frescoes at the Basilica of St Francis in Assisi, Italy, following an earthquake. Other films include: Mission Impossible, which documented attempts by a team of forensic scientists to unearth a mass grave in Kosovo during the Balkans conflict; The Real Gary Glitter, a study of the dark side of celebrity; and God's Waiting Room, a film observing the work of a Muslim undertakers. Series include Make Bradford British, Derren Brown Investigates and The Great British School Swap.

We set up during the first Lockdown so I’ve never experienced running my company from an office.

Do you have any projects in production at the moment and, if so, can you tell us about them and how they’re going?
We’re in pre-production on a project. It’s early doors and we’re watching what happens with the Government’s scheduled wind down of Lockdown. I’m not a betting person – but this feels like we’ve laid a big bet with the best intelligence we could gather, taken a deep breath and are now waiting for starting orders.

What has been the biggest challenge of running your business during the COVID pandemic and how have you tried to overcome it?
We set up during the first Lockdown so I’ve never experienced running my company from an office. It’s meant we’ve been on a steep learning curve of working remotely while making programmes and getting the company up and running and established in parallel. It’s been quite the ride – but with a short film series and a feature doc under ClockWork’s belt, it’s proved do-able.

Everyone will be drawing their own conclusions from lessons learnt in Lockdown and working practices. For me – aside from honing communication skills, being precise with discussions, having decent internet speed and paying for Zoom (so it doesn’t cut out mid conversation) – it’s got me questioning the role of an office.

What film, TV programme or series has most inspired or entertained you in the past 12 months?
I was late to it but HBO’s The Leftovers left my head captivated and my heart enthralled. A terrific piece of work and highly recommended.

What is your social media platform of choice, and what does that tell us about you?
I infrequently use Twitter. It tells you I should probably engage with social media a bit more.

What one thing about the industry are you most looking forward to returning once we’re over the worst of the COVID crisis?
I’ve developed some very tight professional relationships over the last year with some folk I’ve never met. I’m looking forward to finally meeting them in person.

Who is your creative hero?
Billy Wilder – genius with a relentlessly superlative body of work.

If you could change one thing about the industry, what would it be?
Ban schadenfreude.

What long-term changes to the way you run your teams and your business do you expect to last beyond COVID?
You don’t need to be permanently in an office to make telly.

We would like to thank Heenan for taking part in our interview series.